In November 2016 this interesting cover with the additional stamp "Per COOLGARDIE CYCLE EXPRESS CO., HUNT STREET" was placed on the internet platform delcampe at auction:

The back of the cover shows the following stamp from JAMES A. HEALY:

The auction was described as follows: „Coolgardie >>Mirecourt timbres 42,44 "per Coolgardie cycle express Co;  enveloppe, 1897“. No further hint to this famous postal service. With a starting price of 7 euros the whole thing smelled after a real bargain. A few minutes before the end of the auction the price was still at 55 euros, but then in the last minute jumped to 600 euros. Still a bargain?

Maybe not! The cancellation of the Australian Post shows the date 19th March 1897. The local postal service “Coolgardie Cycle Express” however was already discontinued at the end of 1896. The stamp "Per COOLGARDIE CYCLE EXPRESS CO., Hunt Street" was usualy used to cancel the Coolgardie stamps:

- but not as additional information as on the envelope above.

On the auction platform further covers were offered by the seller: all sent to Mr. Victor Chevrier (Mericourt/France) from all over the world - in decorative handwriting, registered and often with beautiful franking:

Mr. Victor Chevrier from Mericourt/France seemed to have been an important business man. However one of these envelopes had this sender stamp:

One and a total: it appears that at the end of the 19th century there was the possibility of ordering such "made" envelopes through stamp clubs from all over the world. These are no letters for need. Regarding the year 1897 of the above Coolgardie letter you probably have to refer to a forgery in case.

Well - one thing is certain: this was a remarkable auction - for delcampe, the seller, all fellow bidders, us bicycle stamps collectors and the happy(?) buyer.

Addendum:
The above envelope was “object of the month” for the internet sales and auction platform “delcampe”:

The auction is described in the (two) monthly magazine “delcampe magazine” no. 8 (January 2017), page 27. Here the translation from French:

Our object of the month has traveled well, this month! This is a letter from 1897 sent from Australia to Vosges in France.
The letter is franked with 2.5 pence, split on two stamps showing swans from 1885 (gray swan:  2 pence, green swan: ½ penny). The mail was forwarded by the "Coolgardie Cycle Express Co".
This company dates back to 1894. It was founded to transport the miners' mail from Coolgardie to the post office. It should be known that the gold found in the Coolgardie mine in 1892 made some 20000 Europeans come in a few years. This territory was 200 km away from the nearest post office. Thus the "Coolgardie Cycle Express Co" was founded.
On the back of the letter the name of the brave cyclist, who delivered the mail, could be found: James A. Healy.
These envelopes are not often found and this one is interesting for several reasons. The letter was offered at a starting price of 0.50 € and ended at 600.50 €. It has been put on auction by "Jeanphili76", a seller present on delcampe since 2003, whose positive average rating is 100%.

The author was somewhat imaginative about the starting price (0.50 € instead of 7.00 €) and the stamp on the back of the envelope: James A. Healy was not a cycling messenger, he was founder and agent of the company – as shown in the second picture of this comic, presented on the chat board of “stampboards.com” under the topic "Coolgardie Cycle Express Company Cinderella Stamps": 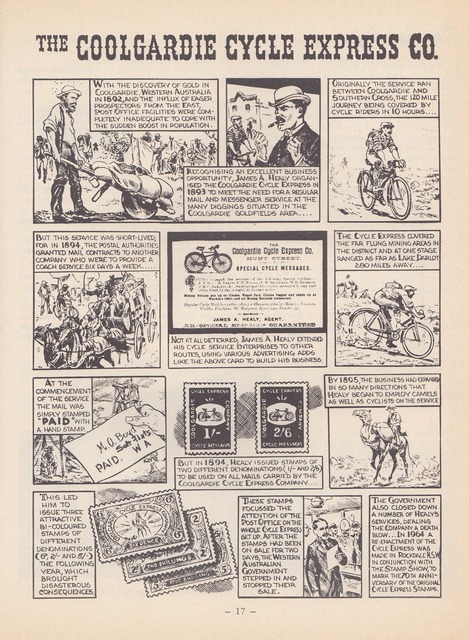 Post of J. A. Healy: History and plate varieties: 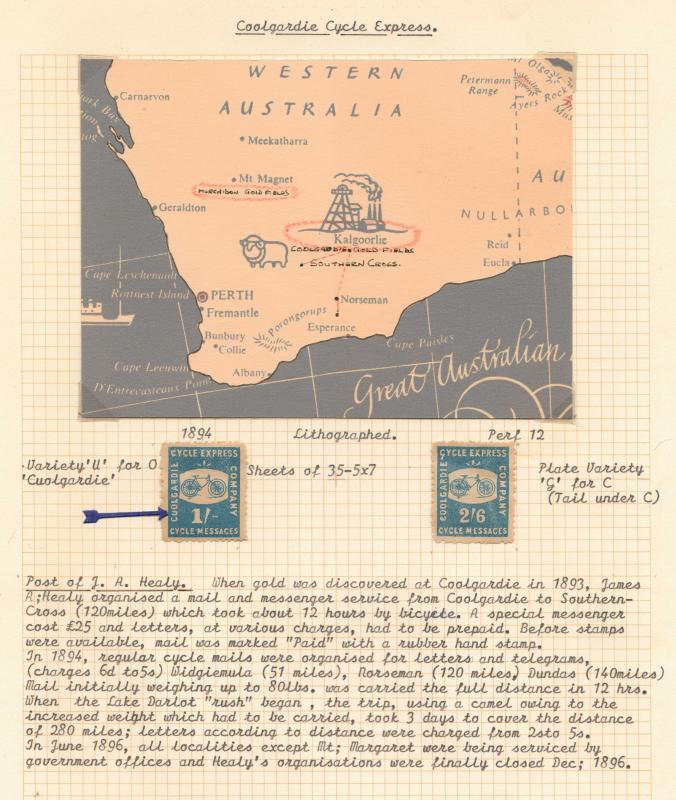 This envelope was also discussed by Eduardo Scardino in his YouTube presentation “Correo en bicicleta hasta 1915” in 2022.