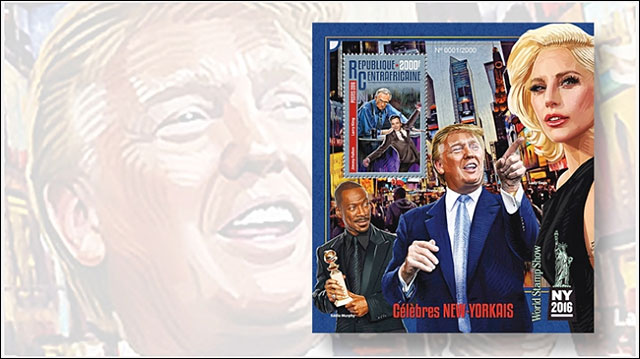 A powerful selling point for Stamperija, agent and publisher of stamps for many countries, is that it can offer its stamp issues on its website with mentioning of the catalog numbers of Michel, Yvert and Scott. I (Victor Manta*) was amazed at the many offers for stamps produced by Stamperija published online by the rather reserved Scott catalog.

I learned from a recent email conversation with one of Scott's officials that Scott's publication criteria do not take into account the code of ethics(2) established by the UPU, and that he just heard of its existence from me... Scott only uses its own publication criteria, which have not changed for decades.

Some philatelic magazines, such as the well-known American philatelic magazine Linn's (related to the Scott catalogs), promote Stamperija products. As an example, here's a headline: "Donald Trump appears by mail on a miniature sheet of the Central African Republic".

A short excerpt from Linn's:
Donald Trump is among those honored as a New York celebrity on a Central African Republic postage stamp. Stamps will be issued commemorating the World Stamp Show-NY 2016, an international stamp show that, from May 28 to June 4, will take place at the Javits Center, 655 W. 34th St., New York. At this fair, the post of the Central African Republic is represented by Stamperija, a postal agent based in Vilnius, Lithuania." 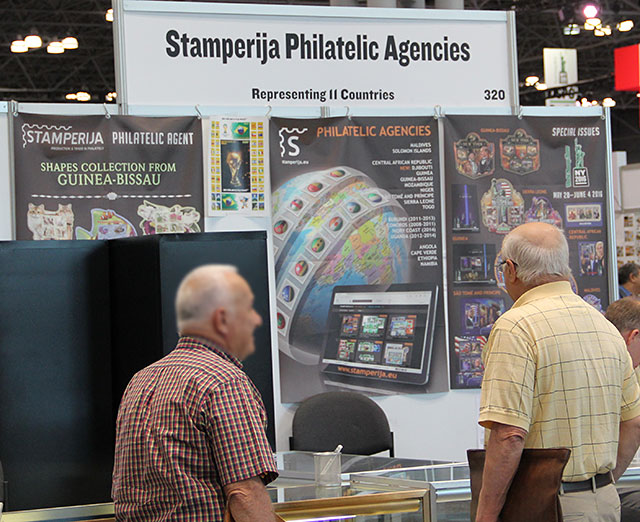 At Stamperija's impressive booth at the World Stamp Show-NY 2016, a salesperson told a customer next to me that the interest in this souvenir sheet is very high and that it is selling very well. Obviously, I was not interested in the spread of such philatelic viruses.

UPDATE: the World Wide Press about the Stamperija issues

In recent years, several African countries have appointed a Lithuania-based organization called Stamperija to design and print their stamps. Stamperija, philatelists shudder at the name, has flooded the market with rubbish. Collectors calculated that Sierra Leone, with a population of 7.6 million and a barely functioning postal service, issued 1566 different stamps in 2016 with the help of Stamperija, compared to 268 issued by Great Britain and 139 by India.

Another example is the Solomon Islands, a former British protectorate in the Pacific. They are trying to recover from a civil conflict that brought the country to the brink of collapse. The World Bank says the Solomon Islands, one of the poorest countries in the Pacific, has been hit by successive global food, fuel and financial crises. You may wonder why the approximately 600,000 residents of the Solomon Islands need 500 different stamps and 150 different stamp sheets per year. Since they don't really need them, and therefore don't use most of them, we can conclude that they were issued to milk the least informed, most naive stamp collectors in the world. 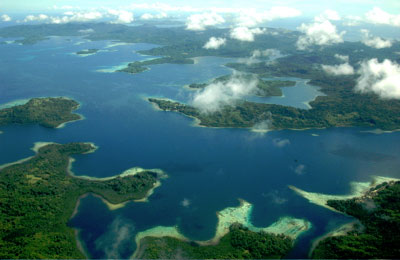 Stamperija's colorful designs are not to everyone's taste. And making so many stamps can lead to mistakes. A set of Stamperija stamps issued for the Central African Republic (CAR) in 2014 turned out not to depict Marilyn Monroe as planned, but a New York drag artist. 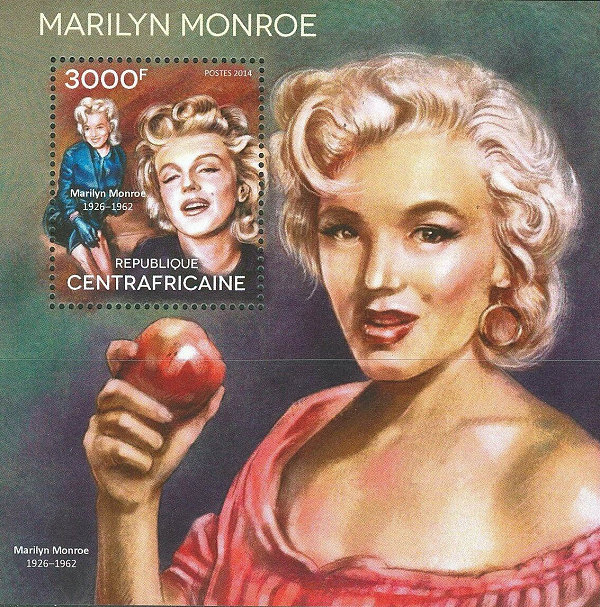 But few of Stamperija customers seem to be concerned. "It's a buyer who wants them, a seller who wants to sell," said a Sierra Leone postal worker. "What's the problem?"

Note: I have added to this article a brief listing of countries whose illegal and harmful stamps have been distributed through or are circulating on commercial sites.

* About the Author: Victor Manta is the founder and current president of the Philatelic Webmasters Organization (PWO) and the editor of the website www.pwmo.org, which has long fought against illegal stamps. The greatest interest of Mr. Manta goes out to thematic stamps and philately on the internet. The philatelic sites have been awarded many times in competitions. He is also a noted philatelic journalist, who has published numerous articles on the internet and in printed magazines around the world. A first version of the above article has been printed in the March 2020 issue of the well-known French publication Timbres Magazine.

This has been introduced in 2008 and was approved by all member states of the UPU. Some provisions:

7.6 Draw up separate contractual terms for the printers in charge of producing the stamps and for the agents responsible for marketing them.

7.7 Only outsource the printing of stamps to security printers who have signed the Code of Ethics for Security Printers for Stamps and who have obtained certification as a security printer or have committed themselves to get this.

Why African countries issue stamps in honor of English cricketers: it helps to pay the bills

LEN HUTTON was an experienced cricketer. English fans cherish the record of 364 runs he achieved in a test match against Australia in 1938. However, it would not be strange to assume that this achievement is less noticed in the Central African Republic (CAR), a former French colony without cricket background. So it may seem strange that in 2016 the CAR issued a series of commemorative stamps to mark the centenary of Hutton's birth - and even stranger that French-speaking Niger and Portuguese-speaking Mozambique did the same (see image). 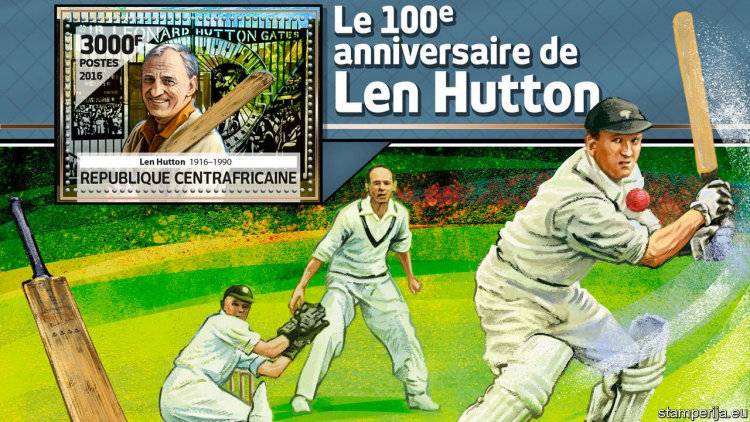 It seems the practice is not limited to bygone English cricketers. Jan Brueghel the Elder died 395 years ago in January, a milestone that Sierra Leone's postal authorities considered important enough to justify a philatelic tribute. Other African states seem to prefer baroque music to Flemish art. It is quite possible that the people of Guinea-Bissau have let the 260th anniversary of Johann Sebastian Bach's death pass without much noise. Fortunately, their postal service was alert.

Stamp issues give countries the opportunity to honor national heroes. Still, there is a motivation for printing stamps with long-dead foreigners. It would be difficult to walk out a post office in Bangui, the backward capital of the CAR, with a Hutton stamp. But collectors who scour the internet are willing to pay nicely for such things. A set of Hutton stamps from the CAR will deliver € 15.50 ($ 18.50). Niger's image of a suitable Hutton is wanted enough to demand a fee of $ 2. This is a useful way for African states to increase revenues.

True philatelists get scared of this kind of things. Stamps should only be issued to meet local demand, they claim. But targeting the collectors market is not new. Smaller and poorer countries have been doing it for 70 years, notes Ian Harvey of the Royal Philatelic Society London. Even the British Royal Mail has been accused of defrauding collectors.

PS: Each of us must determine for himself how and what to collect. Whether a stamp is illegal or undesirable in principle only applies to the exhibition collections. I myself only buy stamps from this kinds of countries if there are run pieces, normally franked with motorcycle stamps. Sometimes these countries also have official stamp issues among all the trash. This can be checked in the WNS of the WADA. Besides the illegal issues from Stamperija, we also know the bulk of stamps that appear from the IGPC. Hans de Kloet has previously reported on both firms.

Mr. Bengt Bengtsson, a philatelic jury member from Sweden, established a classification of "underised postage stamps" (March 2001) that he felt should not appear in collections presented at philatelic exhibitions. We (PWO) updated this list by adding a few more countries, based on what we've learned from observing the philatelic market.

Author: Nico Helling    contact: This email address is being protected from spambots. You need JavaScript enabled to view it.

Below are a few additions that relate specifically to bicycle stamps.

Bengt Bengtsson: List of illegal and untrustworthy stamps from all over the world - updated 2015.

It is noteworthy that countries such as Australia, Great Britain, Japan and New Zealand are also listed because of their untrustworthy stamp issues (see page 6). This is understandable when considering the variety Australian stamp issues on occasion of the Commonwealth Games 2006:

-  (Please click on the picture to see the sheets showing only the cycling champions.)

There are several hundred Stamperija stamp issues related to bicycles. Here some examples:

-  (Please click on the picture to see a small selection of sheets.)
Since about 2018 these sheets are marked with a red "X" in the online catalog.

Very occasionally used Stamperija envelopes are spotted on internet auction platforms. Here is one from Burundi: 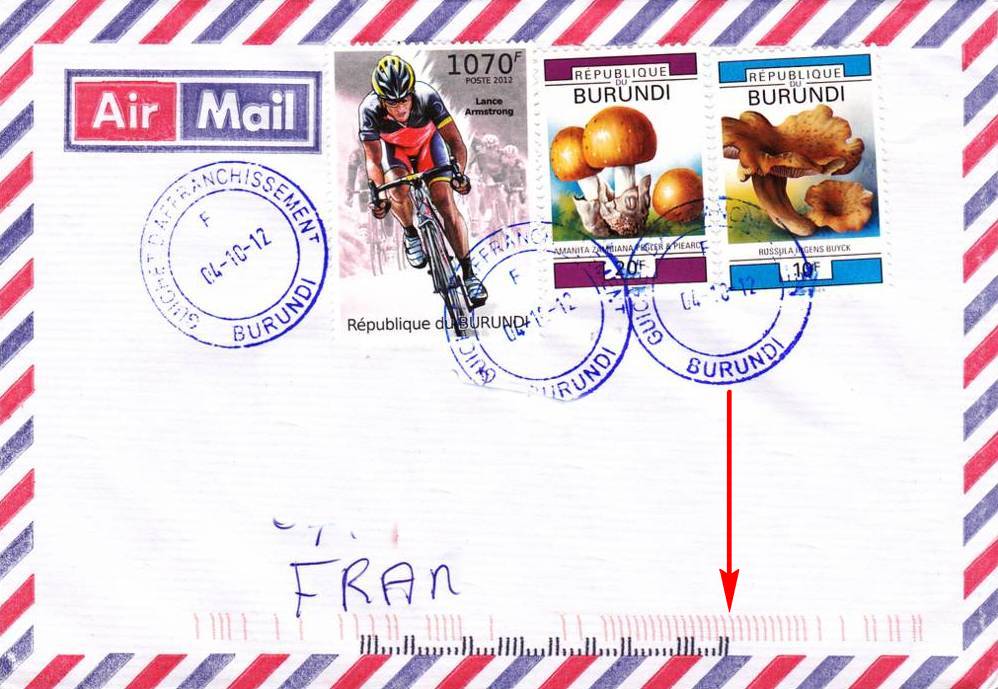 The barcode at the bottom indicates that this letter indeed went through La Poste France. The Stamperija stamp is combined with mushroom stamps issued 20 years before (30.09.1992). Their low face values of 10 and 20 F absolutely don’t fit to the high value of the Stamperija stamp (1075 F). Curiously there are more postage options for an airmail letter to France: 1020, 3000 and 3020 F.

-  (Please click on the picture to see envelopes with these rates.)

The cancellation “guichet d'affranchissement” means that the letter has been franked at the post office counter and handed over to the post office clerk. At this point it should be noted that Burundi is not only one of the poorest, but also one of the most corrupt countries in the world:

Things are certainly not taken so strictly in Bujumbura - as the date on this envelope suggests: 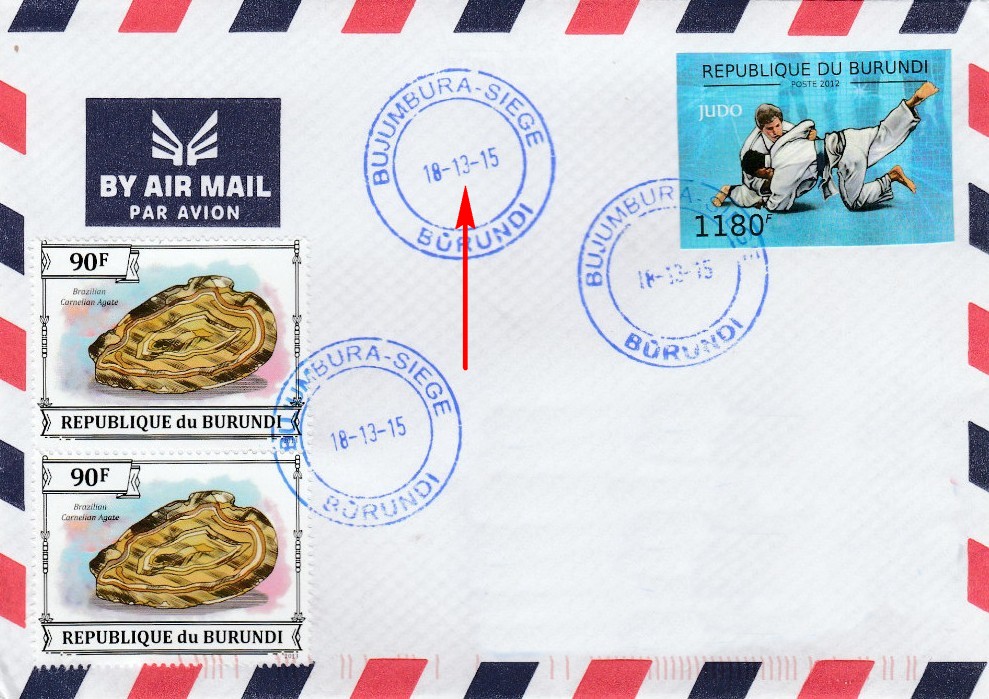 In summary these envelopes are exactly the same thing as the Stamperija labels sticking on them: Ready for the waste paper bin. Therefore: hands off.

Edelcollecties: The name is program: “Edel” = noble/precious. The stamp designs are attractive. The sheets are delivered in books/albums with richly illustrated background information. The editions are limited (7 500,10 000, ..). They are often delivered in subscription for a special topic collection. You can return items you bought and don’t like.
The stamps come from countries as there are: FSM (British Commonwealth of Micronesia), Guinea-Bissau, Penrhyn, Samoa, Solomon Island, St Martin, Uganda, ….. Some of these states are mentioned on Bengtssons list. Sheets from micro islands might be official ones or personalized issues. Difficult to say – even if you ask professional dealers. You hardly will find these stamps on used envelopes.
Nevertheless they are quite popular in the Netherlands (and Belgium?). So if you ever want to sell your noble-edel collection you will get back a part of the money you paid.

-  (Please click on the picture to see a small selection of their sheets.)

Smaller companies without own printing machines and private persons switch to personalized stamps which could be ordered from many postal services, e.g. ucollect from the Netherlands

-  (Please click on the picture to see a small selection of their bicycle stamps.)
These are not illegal but they are only printed to pull the money out of our pockets. As a general rule: the more we buy, the more creative these businessmen become and the more they print. A vicious circle. So don't ....