During my search on the worldwide web for acquisitions for my motorcycle collection, I regularly came across offers of "2nd and 2nd large errors". My interest was aroused. What would those error prints mean, and are they worth adding to the collection?

But before we continue to answer these questions, let's give a brief explanation of what Post & Go stamps (labels) are.
Post & Go stamps, also called Faststamps, are stamps with variable value that are printed on self-adhesive labels. They are sold through stamp vending machines by Royal Mail in the United Kingdom, as well as Jersey Post, Guernsey Post, the Royal Gibraltar Post Office and Q-Post (Qatar).
Post & Go stamps are actually not postage stamps but machine stamps or strips.

The first tests of a system called Weigh and Frank were conducted in April 2004 by Royal Mail and Post Office Ltd. in three selected post offices. While the machines were suitable for a range of different post categories, the apparent complexity and relative slowness kept customers from using it. Post & Go machines from three suppliers (IBM, Fujitsu and Pitney-Bowes) were tested at nine locations in 2007.

In 2008 these machines were replaced by Nixdorf machines and 700 machines were rolled out nationwide.
The first Nixdorf Post & Go machines (also called Self Service Kiosks (SSK)) were installed on October 8th 2008 at The Galleries, Bristol, followed by those on October 10th 2008 at the Sunderland and South Shields post offices. 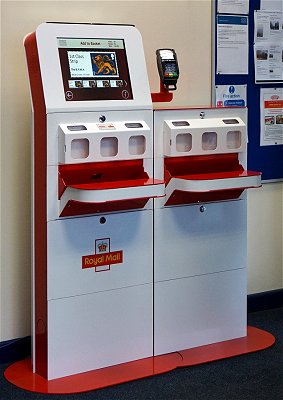 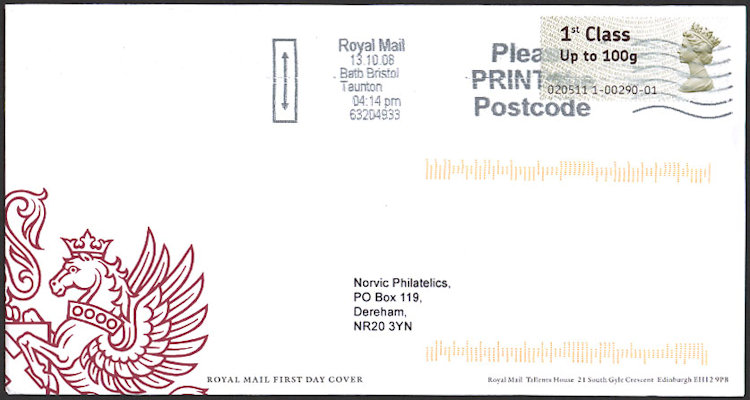 Another group are stamps for services such as heavier letters and small packages, where the price depends on the weight. These show the type of service and the price. Originally, they only showed a security print on their left side and a "post-by" date (for posting no later than the day after issue) and were not allowed to be canceled (in accordance with the use of Horizon labels). Current Open Value stamps are only printed on labels with the Machin design, do not display a "post-by" date, and are treated like any other stamp. 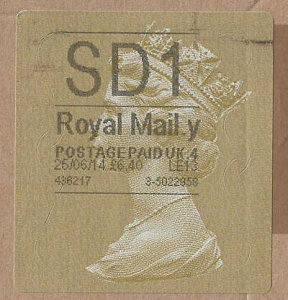 Later on other images were added, such as the series with postal vehicles, including the strip with the images of bicycles and motorcycles that is of interest for us.

Post & Go stamps with additional inscriptions have been issued on the occasion of various philatelic events and also for selected institutions.

The wide variety of possible combinations of service types, designs and additional inscriptions presents a challenge for collectors.

An overprint code in the lower left corner of the stamps makes it possible to trace their origin, as the first six digits in the code correspond to the machine from which the stamps were sold.

But now the question of what the error prints of the 2nd and 2nd large are.
At first I was told that the lines depicted in the background are different. But a study of the 2 different series of stamps shows no difference in the pattern of the lines. Other suggestions also do not provide an explanation for the reported error stamps.
The origin of these errors is simple. The ATM machines (ATM = Automated Teller Machine) contains three rolls. The left roll is for printing the stamps with the value 1st Class and the right roll for the stamps with the value 2nd Class. The middle roll is used for printing the receipt of the printed stamps. 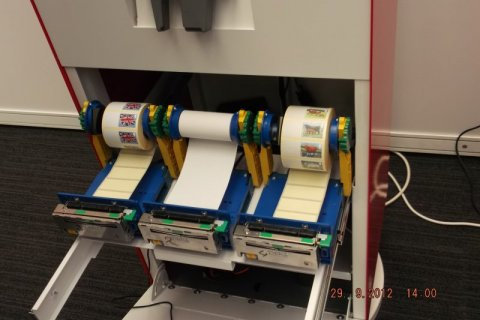 The stamps that matter to us, POST & GO ROYAL MAIL HERITAGE - MAIL BY BIKE STAMP SET, are intended for 1st Class and 1st Large. The error stamps or oddities have arisen because the stamps were "accidentally" placed on the place of the roll for 2nd Class. It is noteworthy that they are more common in franchise post offices, such as Middlesbrough, where staff training standards are not always of the highest standard. 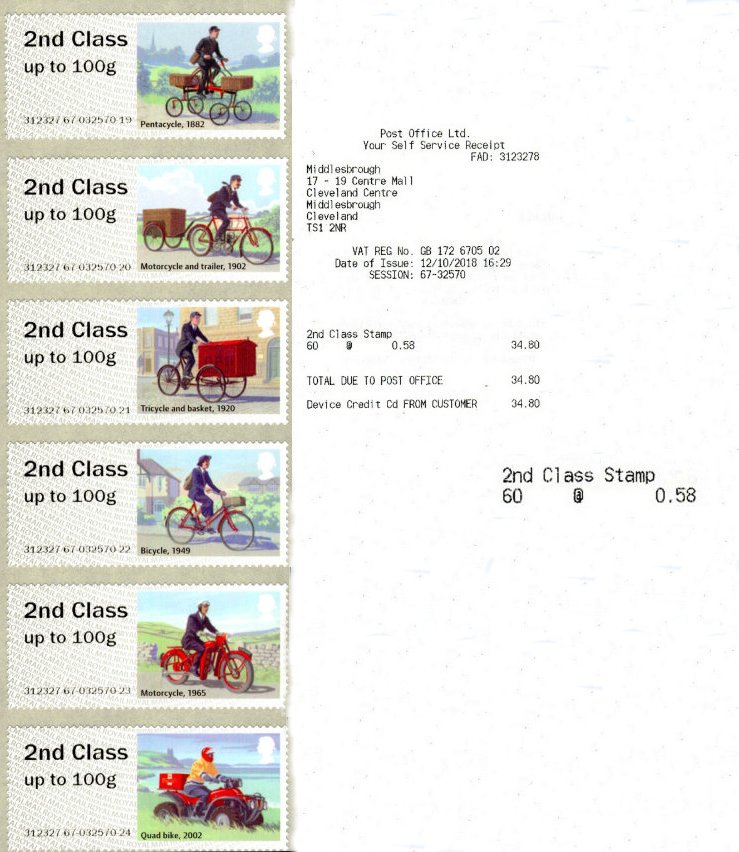 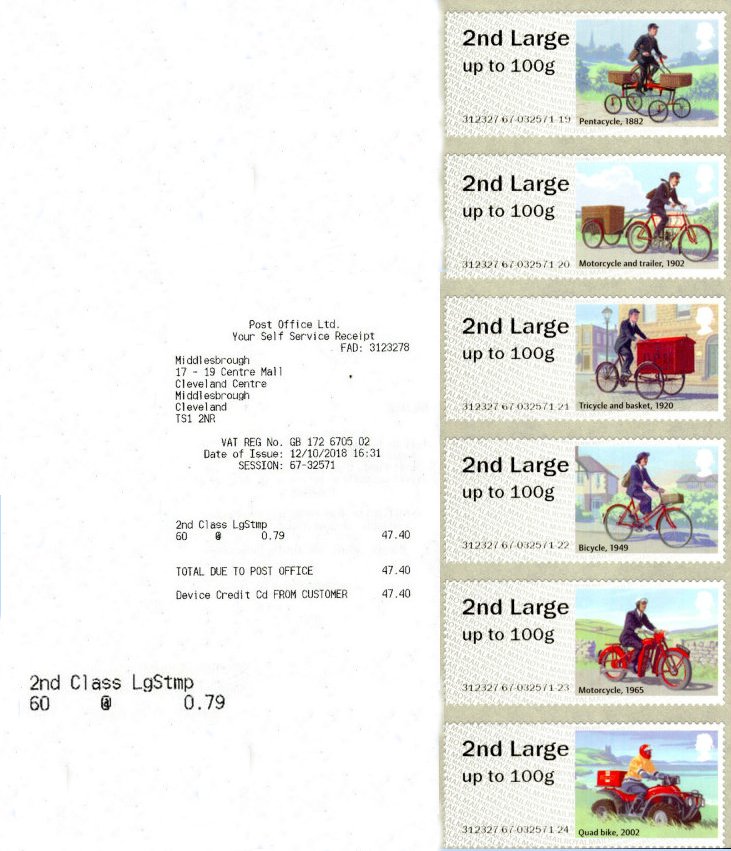 A maximum of 99 stamps can be purchased from the machines at a time. Up to 6 stamps they are printed in a strip with the desired number. With more than 6 stamps, the stamps are printed in strips of 6, and the remaining ones in a strip with the remaining number. For example, if you want 27 stamps, you get 4 strips of 6 stamps and 1 strip with 3 stamps. Each strip of six stamps contains all the different motifs from the series.

As with all other stamps, a presentation pack is also available. This contains a strip of the six different stamps. 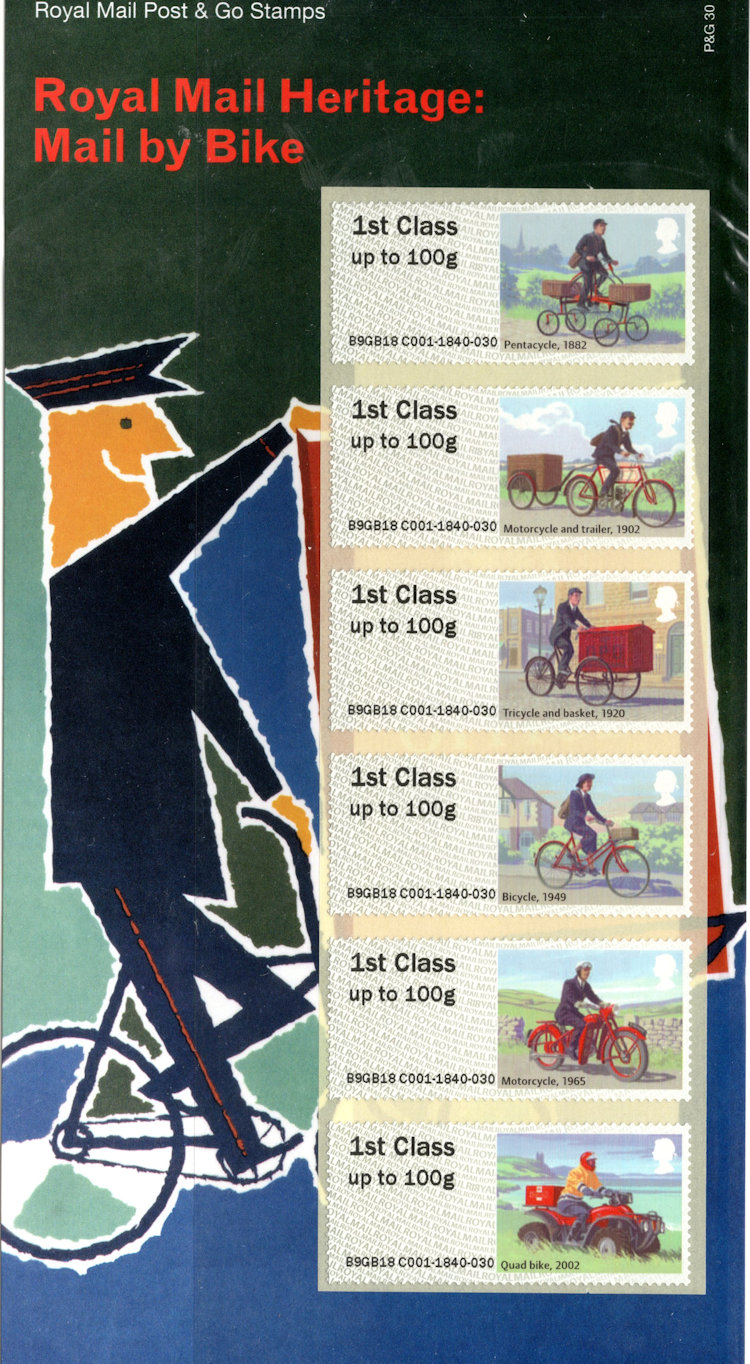 On the back side is a story about the reason for issue, illustrated with images of different motorcycles. Clockwise from top left: a postman with a 1934 BSA combination, a rural three-wheel motorcycle with basket from 1905, and a standard delivery bicycle from 1938 used in a suburb. 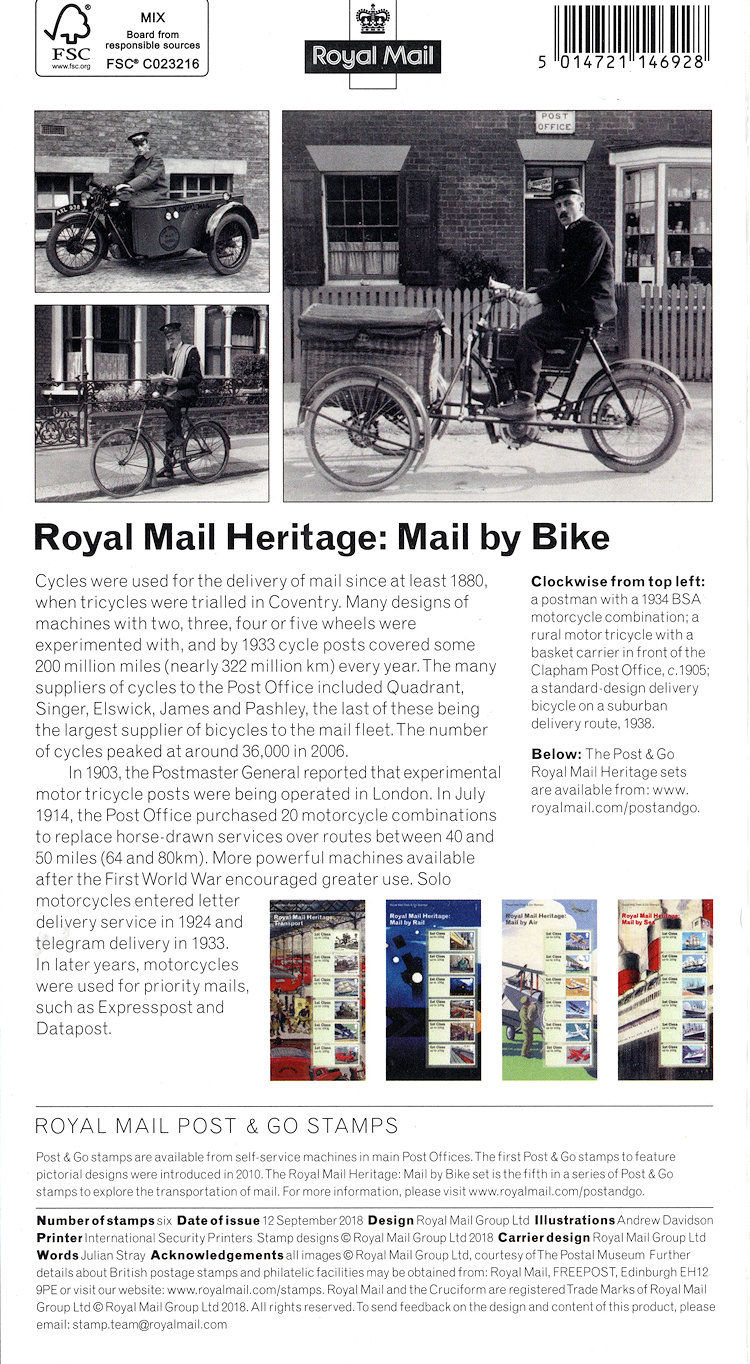 The conclusion is that the 2nd and 2nd Large "error" did not arise during production, but are due to the, whether or not deliberately, incorrect placement of the stamps roll in the machine.

But these stamps only state information about the printer itself. Are they test stamps, or just some attempts from someone?

Author: Nico Helling    contact: This email address is being protected from spambots. You need JavaScript enabled to view it.

This article was originally published in the newsletter no. 132 of The Dutch Motorcycle Philatelists Club MFN (Motor Filatelisten Nederland) in June 2020: Post & Go ERROR 2nd and 2nd large