The Australians are a sports-mad nation. This is also reflected in their postage stamps - here e.g. the boxing kangaroo on a bicycle:

Which kangaroo has a reference to cycling? Well - it is the one with the imprint "TDU Adel 2010": 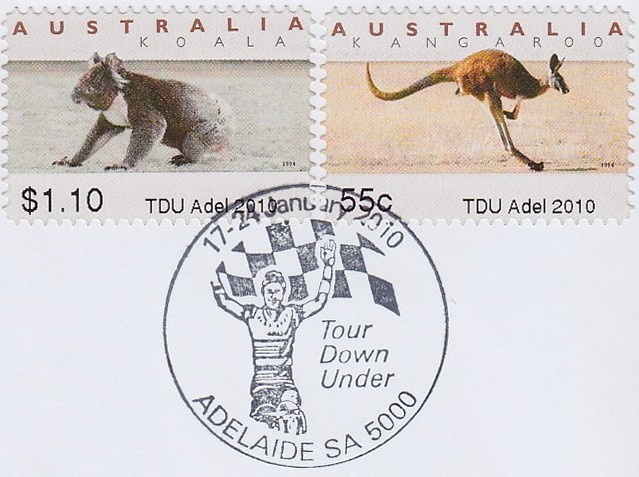 TDU stands for "Tour Down Under" (officially: Santos Tour Down Under) and “Adel” for Adelaide/South Australia. This cycling race on a circuit around Adelaide was started the first time in 1999 and is considered to be the most important in the southern hemisphere.

Although the above jumping kangaroo was supported by this Australian Team

the winner in 2010 came from Germany: André Greipel. But in the following year Cameron Meyer/Australia made it with the same team but with more money in the cash register (increased postal rates from 55 to 60 cents): 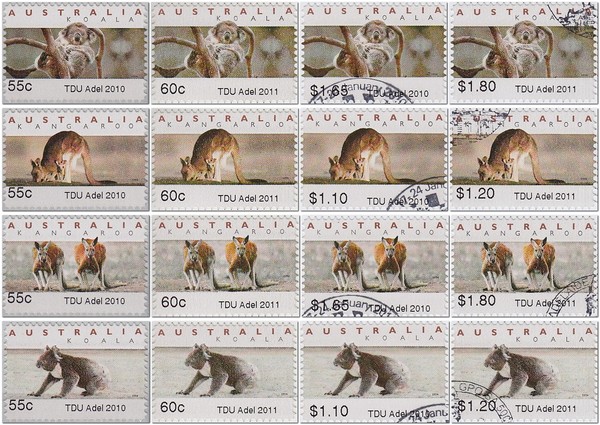 To the delight of us collectors there are also some misprints like these from 2010: 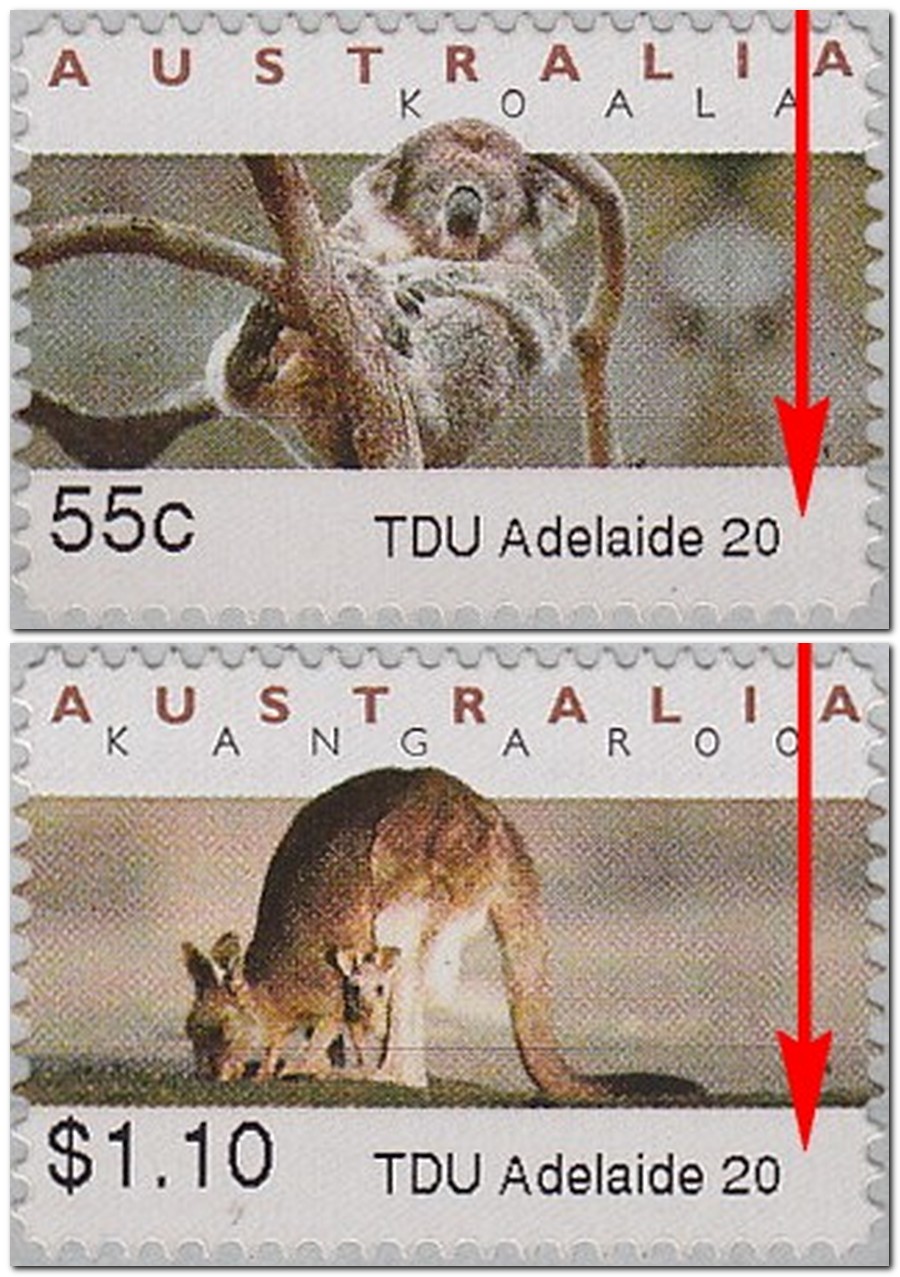 If you know of other misprints please contact This email address is being protected from spambots. You need JavaScript enabled to view it.

It is doubtful whether other values exist. These stamps were originally an experiment of the Australian Post for an electronic sales system. These so called counter-printed stamps were produced by Pemara Labels. The post office of issue and the stamp’s value are printed at the base of each stamp by a special printer developed by Tritech Electronics - therefore also the name TRITECH ATM for these issues. Nowadays these ATM are only used at special philatelic events. Postally used stamps are very scarce since about 2000. They may be found if someone posted an overseas letter as a souvenir for a friend.

In 2012 the TDU hosted the first time a series street criterium races for women. An annual women’s race was established in 2015 as part of the National Road Series and is carried out nowadays as “Santos Women's Tour Down Under”: 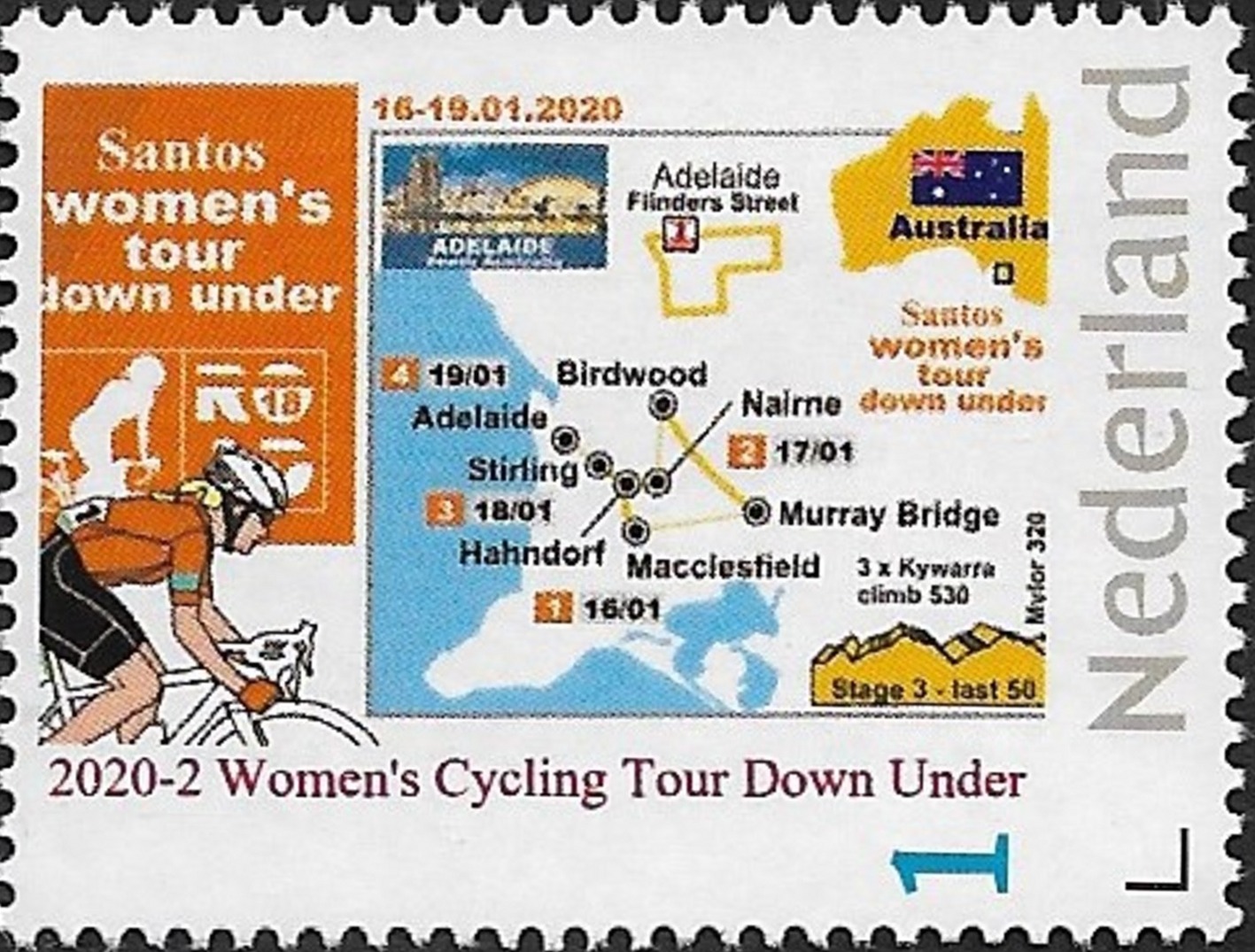 The above stamp is a personalized issue from PostNL printed for Ucollectstamps. Ucollectstamps produces many of these items for collectors every year. They are not cheap and carelessly designed: the description “2020-2 Women’s Cycling Tour Down Under” comes from their internal numbering and does not enrich the stamp image. The more of these items we buy, the more are produced. So think carefully about whether you need this stamp for your collection or not.

Go on keeping your eyes open – not only for TdF (Tour de France) but also for TDU.. 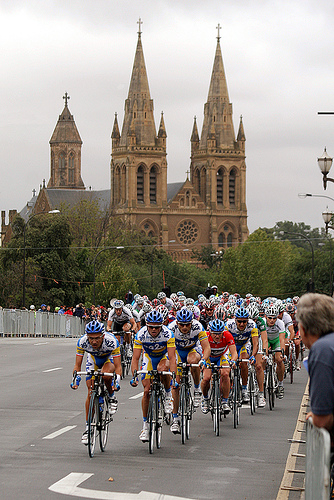 More information about Tour Down Under: wikipedia

Postcard with the information about counter-printed stamps

Thanks to Harry and Joy Lower, Greenwith/South Australia (suburb of Adelaide) for providing above information and philatelic material.